We now routinely fall asleep to coyotes’s howling in the distance. We track their prowling footsteps in the early morning sand and watch as they wander the desert floor behind the desolate beaches during the days.

An errant scorpion jetted across Tony’s hand as he opened the battery box.

We have mastered the genocide of at least ten thousand, hateful, black flies. The stats of the Yankee’s best pinch-hitter would pale by comparison to Tony’s accuracy with a flyswatter.

I am the modern version of Annie Oakley, choosing a deadly can of mosquito spray instead of her famous six-shooter. My aim is as good as any world record holder and, I am proud to say, I have not poisoned any one of the three of us, yet.

We have spent a Kings ransom on bug repellent products and built screens for every window and door on the Baja Buggy.

Dogs have chased us down desert roads, barking and biting at our heels, as we rode our bikes.

Tony had a minor run-in with an angry sting-ray.

Nothing has presented the challenge of Nacho the Cheeseman.

To the best of our recollection, we picked up our little hitch-hiker some time after arriving in La Ventana. Actually, it was soon after our encounter with the scorpion that we started to notice his tell-tale signs.

At first it was only some dust balls dragged out from under the refrigerator. We blamed it on the scorpion, spent hours researching them, found out that they could have up to twenty-five babies at a time and immediately panicked and tore apart the battery box we saw him run into. No sign of him or a nest! What next?

A couple of cold beers for Tony and a few rum and cokes for me and we decided to deal with it tomorrow.

Tomorrow came sooner than we expected and brought with it mouse turds on the kitchen counter. Ugh! Disgusting, but this seemed to us to be a simple problem. We’ve been catching mice all our lives and the last one was right here in the van. A quick trip to the store to buy a couple of traps and our problem would be solved. Tony happily left for the store, as I reminded him to get more beer, too. He smiled and waved good-bye. The nightmare had begun.

He bought two traps and set them with nice little hunks of my cheese…..the one that goes with my wine. I persevered and didn’t complain. He looked smugly at his decorated traps and went to bed, confident in his ability to conquer the mouse. I guess it’s a man thing.

He awoke with a start at dawn’s light, troubled by the fact that he had not heard the snapping trap. “Good God! The cheese is gone! The little SOB got the cheese out of both traps without setting them off,” were his good morning words to me. Stunned, he sat staring at his traps. I could tell he considered this a personal attack on his manhood. I was right. My chess-playing husband carefully constructed a strategy to outsmart this devilish creature. Different ideas for loading bait, different baits and various other options were discussed and decided before bedtime.

Without fail, he was rewarded every morning with new mouse turds, more wood shavings, half eaten poison crackers, unsprung traps…devoid of their bait and what he swore were sounds of laughter coming from the cabinets. The sticky sheets collected a fly.

This mouse had now become legendary. Men all over the campsite were discussing The Battle of Tony and Nacho the Cheeseman. I hid my cheese.

By the time we arrived in Las Barilles, it was decided that we needed more troops and a local exterminator was called in.

He armed us with infallible poison, stickier sticky sheets and he sprayed every nook and cranny of the van with the “strongest insect spray known to mankind in the world” just in case the scorpion was still hanging out. He guaranteed his products and told us a long list of varmints he had caught with them.

We felt confident and paid him in pesos. We took Charro to the pool and we all had a nice, long afternoon in the blazing, hot sun, so as not to kill ourselves breathing in the poison-filled air of the van.

He was right. Nacho seemed to be crazy about the poison squares. Every night he dined on a new one, carefully avoiding the “new and improved” sticky sheets. His turds seem to be getting bigger and we were sure he had gained weight.

We are now into our sixth week of Tony’s quest to eliminate Nacho the Cheeseman from our life. He has built a “better mousetrap” and he is arming it with his three traps, a diving board and pop-corn. The fact remains that Nacho is in his sixth week of survival. 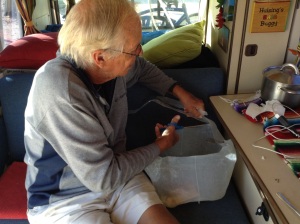 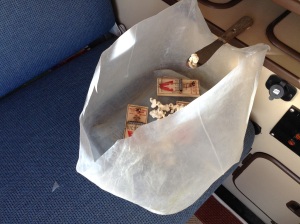 We are three days from home, Nacho has come a long way, Tony has developed new bars for frustration and I think our little mastermind, our little super mouse will find a new home in Ensenada and this battle will be chalked up to a draw.

Footnote – Ding – Dong, The witch is dead!  So are her two babies and that’s how we know she is Nacha the Cheese Lady and not a Nacho.  Tony wins!

One thought on “Varmints, Varmints Everywhere and Not a Bite to Eat”